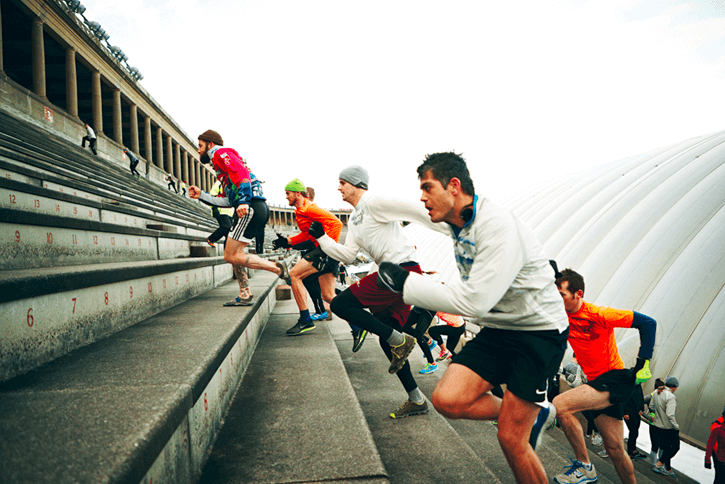 Nationally recognized fitness expert, Michael Wood, CSCS, author of the new book TBC30: 6 Steps to a Stronger, Healthier You published by Wicked Whale Publishing, talks about one of the best and easiest workouts you, and anyone, can do.


Running, walking or bounding up the cement stairs at Harvard University stadium for many people, including myself, never seems to get old. All you need to do is to visit the city with the world famous zip code (02138). On any given morning, especially the weekend, you’ll see all types of people, male and female, athlete non-athlete, young and old, moving through their workout routines at the nations second oldest stadium built-in 1903. The oldest stadium, by the way, can be found on the campus at the University of Pennsylvania, built-in 1895.

The last time I found myself at the stadium was with my friend, Dino, working out early one Saturday morning. As always, there were other fitness-minded enthusiasts who ended up along side us, walking or running the 15-inch high cement-steps that include 31-steps, from bottom to top, organized in 37-sections. The steps are typically used as bleacher seats during Harvard football games and other sporting events. The idea is to run or walk each step up to the top and then try to recover as you make your way to back down to the bottom before repeating the meditative sequence. The goal is to traverse around a horseshoe layout designed stadium, moving from section one through section thirty-seven. So by the time you’re done you have climbed approximately 1,147 steps. They also have a smaller flight of “red” steps between each section that you can choose to use — and which if you’re smart — you’ll use on the descent to try to recover somewhat before ascending back up using the big boy steps. If you’re new to stadium stair workouts, your best option would be to start on the smaller red steps until your fitness level improves before supplementing with the bigger steps that are about double in height. Why? Because of something known as delayed onset muscle soreness (DOMS) that you’ll experience if you do too much too soon.

I believe it was Harvard’s legendary crew coach, Harry Parker, fresh from coaching the 1960 Olympic Team, who first started taking his teams there, in that same year, using stadium running as an important component for his student-athletes year-long training program.

“…how he (Harry) transmitted osmotically a quality of steady confidence into those who rowed in his boats. He didn’t say much, he just beamed it into our souls. An amazing coach; a treasure of a person.” Roach495

Since then many coaches have adopted his training methodology and have continued the tradition. There are amazing stories that you hear about of high-level athletes running all the stairs, twice, in the same amount of time that it would take an average fit person to complete them once! I always love seeing someone — especially an athlete — bound up an entire section of stairs going from top to bottom. Talk about human performance and overloading your muscles, but personally, I prefer doing it on grass or sand where it’s much safer on your tissue and joints.

My first experience doing a stadium stair workout in Cambridge dates back to the summer of 1988 when I was working as a trainer at a nearby swanky health club in Harvard Square. The club was in walking distance to the historic stadium and served as a great warm-up prior to the upcoming mind-altering workout. In retrospect, it’s interesting to think about all the energy that I expended sweating through hundreds of workouts throughout the years, which for me includes more than four decades. Maybe the cumulative effect of those workouts will add a few years to my lifespan?

Workouts typically consist of either individual sessions or accompanied by family, friends or on special occasions, with large groups of members from area Koko FitClubs. During all that time I realized that it never once seemed like the same old workout; each time it seems fresh and exciting when I make the hour drive back to the city with the world-famous zip code. I can remember in my mid-20’s taking private clients to workout 3–4 times a week over at the stadium. I can remember one time walking back over the Larz Anderson Bridge following a stadium workout, crossing the Charles River and then waiting at the intersection at Memorial Drive for the lights to turn green. I remember feeling so spent as the experience became forever ingrained in my brain as I looked down at my legs shaking uncontrollably. Talk about overloading your neuromuscular system. Back then I had no problem running the whole stadium while today that may not happen but I do take pleasure in watching my daughter, Julia who ran in college, take charge and own the stairs, like I once did, running all 37 sections. She knows the history of me putting my wife, Robyn, on my back, on our second date, and walking up to the top when I was just a few years older than her. Or another time when I was in the middle of doing a stair workout with my buddy, Michael, when a helicopter landed in the parking lot of the stadium and out walked multimillionaire Malcolm Forbes and who to our surprise, came right over and said hello and asked us “how was the workout boys?” That was 1990 and not too long afterwards he passed away at age 70.

Workouts like stadium stairs are a great activity to do individually or with your family and friends. It’s especially nice though when your kids also end up loving it and can workout with you. Maybe one day they will take their own children there for a visit and continue the tradition. The only thing that continues to grow old, however, is us and not that great, iconic, cement structure that contains so much history, so many of our memories and all of our dried up sweat!

Understanding that not everyone has access to a college or high school football stadium, other beneficial options may be skipping the elevator at work and take the stairs instead. I also get asked all the time, what other workout offers a similar bang for the buck in terms of maximal calorie burn in minimal time as stadium stair workouts? My answer is a stand-up bike (SUB) made by a company out of California called ElliptiGO.

Michael Wood, CSCS, PN1, is widely recognized as one the nation’s top health & fitness experts. He is a certified strength & conditioning specialist and nutrition coach (PN1). He serves as the Director of Michael Wood Fitness, formerly known as the Sports Performance Group, Inc., established in 1988.