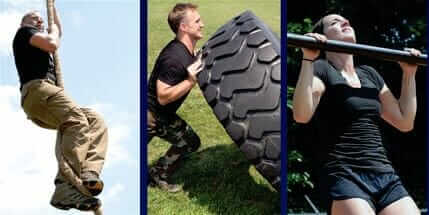 A few of the events in the Tactical Fitness Test highlighted in my new book Tactical Fitness include sprints, shuttle runs, and agility tests. More fitness programs in the military and police as well as special operation groups of both are focusing more on speed and agility than longer distance runs.

Fitness tests are evolving from the standard pushups, situps, 1.5-2 mile run into more speed, agility, and combat conditioning throughout the military as well as in law enforcement pre-employment hiring phases.

Many people think that after high school or college athletics, there will be little need to keep running sprints and over time will either become a lifter who never runs, or a long distance runner who never lifts. To be a tactical athlete today, you have to be well rounded and train in a way where you still have endurance and muscle stamina, but also strength, speed, and agility. Very often, obtaining and sustaining employment in many tactical occupations (military / police / Special Ops / SWAT), you will need to add some sprint and agility training into your current training plan.

Many military members leave the service and join local or federal law enforcement. The change from testing just 1.5 mile – 3 mile timed runs in the military and having to run sprints and agility tests may seem easy, but can be very challenging to compete on a high level without injuring yourself.  If you were not a part of the few military groups that actively train and test speed and agility, these tests are difficult for first timers or those who are not used to sprinting.

Here are many of the events used to test both speed and agility and the agencies that utilize these testing events to monitor candidates and members alike:

These tests are relatively easy to train for. Basically, after a thorough warmup, do a few of the tests at 50% full speed to get the motions of the event understood and continue to make the warmup more specific to the test. Then build up to 100% full speed once or twice for the day.  Continue on with the remaining sections of your workout. If you do this 2-3 times per week, you will see big improvements in your times.

Depending upon the route you are choosing for your profession, it is recommended to do your research and find out what the testing elements of your training will require. As you age, you definitely want to make sure you add running fast with directional changes into your weekly routine. Otherwise, tight hamstrings not accustomed to sprinting and ankles not ready for quick changes of direction will fail you too quickly costing you success in advancing into certain programs or failing to get hired.

STEWART SMITH, USN, is a graduate of the U.S. Naval Academy, a former Navy SEAL, and author of several fitness books including The Complete Guide to Navy SEAL Fitness, The Special Ops Workout, Maximum Fitness, The S.W.A.T. Workout as well as new titles The Navy SEAL Weight Training Workout and Tactical Fitness. Stew has trained thousands of students for Navy SEAL, Special Forces, SWAT, FBI, ERT, and many other military, law enforcement, and fire fighter professions. He is currently the Special Ops Team Coach at the US Naval Academy that prepares future candidates for SEAL, EOD, and MARSOC training and runs a non-profit called Heroes of Tomorrow where he trains people seeking tactical professions for free.