5 Tips to Make the Most of Your Treadmill Workouts 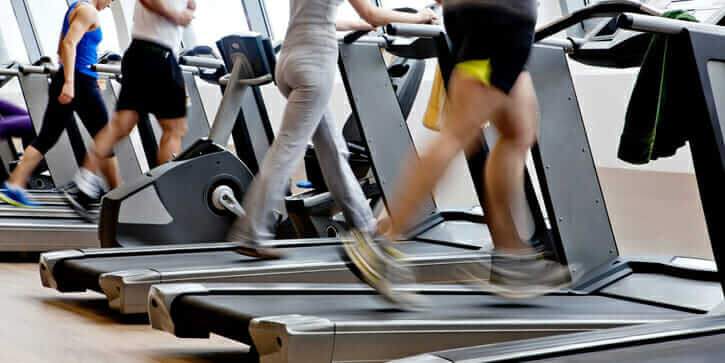 Here are 5 tips to help you make the most from your treadmill workouts:

That is, don’t fuss with the fancy programs that are often available on a treadmill. This gives you more control over how much you push yourself. Basically, you want to listen to your body (as you would when running or walking outside), not the machine. This will help keep you in tune with any developing aches and pains that could lead to injury.

Your cadence is the number of times that the same foot touches the ground in one minute. Keep it at 90 or above. If it’s any less than that, you’re over-striding. That is, you’re taking longer strides than what’s physiologically normal. Over-striding imposes excessive forces through your joints, bones, and tendons.

Listening to songs that have a good strong beat like Hip Hop and Rock can improve your motivation, which in turn improves the quality of your workout. I still strongly discourage listening to music while running outside on the streets since headphones make you oblivious to cars, bicycles, and other potential dangers. But I’m all about cranking it up when on the treadmill. Also, don’t be afraid to explore other things that may motivate you, like watching TV. The treadmills at the Y have a “Virtual Active” display that take you virtually through a bunch of running courses around the world. I’ve been enjoying virtually running in Italy, Argentina, New Zealand, and along the Sunset Strip in L.A.

Tip Number 4: There’s No Need to Run on an Incline

You don’t have to run on an incline if you don’t want to! I’ve never used the incline on a treadmill. This is mainly because it confuses me as to how hard I’m actually working, there are no clinically significant biomechanical differences between running on a moderate incline or a level treadmill surface. That is, the peak stresses on your knees and your other joints are the same whether you run on an incline or not. It is true that running on a treadmill is slightly easier than running over-ground but I find that I’d rather just increase the speed a bit rather than run on a slight incline. I find that incline is an added variable that seems to be very inconsistent between different treadmills. The reason for the variability lies in how the treadmill is mechanically jacked and supported when in an incline position. Depending on the quality of the treadmill, the incline mechanism affects the stiffness of the treadmill surface and can sometimes introduce vibrations, which complicates things even more. I like to know exactly how much work I’m doing. And altering just the speed allows me that opportunity.

If you’re training to increase endurance, follow the 10% rule:  Don’t increase your mileage any more than 10% per week. What’s not well recognized is that it takes longer for your musculoskeletal system to adapt to training than it does your cardiovascular and respiratory systems. When first starting out you will notice your breathing gets easier in the matter of days and you may very well want to increase at a faster rate than 10% per week. But just remember, it takes weeks and months, not days, for your muscles, tendons, ligaments and even bones to get stronger. Be patient. It will happen, as long as you don’t push yourself too hard, too fast and get injured.

Dr. Casey Kerrigan, a Harvard Medical School graduate recognized by her academic peers for her peer-reviewed published research on gait (walking and running) and the effects of footwear, left her perfectly good job at the University of Virginia, where she was the first woman tenured professor and chair of the department of physical medicine and rehabilitation (PM&R), professor of mechanical and aerospace engineering, and professor of sports medicine, to make OESH.

Casey’s research, along with her years of clinical experience treating the wide variety of problems linked to poor footwear, led her to develop OESH. Additional motivation derives in part from Casey’s experience as a distance runner at the University of Chicago, where she set several school records in the early 1980’s and from her devotion to her three athletic daughters.

Find out more at www.oeshshoes.com.