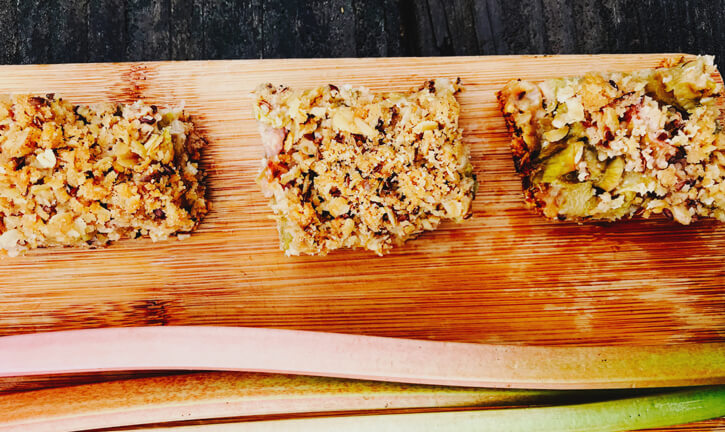 Rhubarb is typically the first spring crop to pop up in the Catskills. The fruit filling of these bars can be altered depending on the season.

In a large bowl, combine brown sugar, oats, flour, flax and cinnamon until mixed. Add the butter and, with an electric mixer, mix until completely combined and butter is not visible.

Set aside 1 cup of packed mixture. Press the remaining mixture into the bottom of the prepared pan. Bake for 20 minutes, or until dry and golden brown.

Meanwhile, combine rhubarb, corn starch and sugar in a large bowl. Spread rhubarb mixture on top of baked crust. Spread remaining crumble mixture over filling and press down slightly. Bake for 45 to 50 minutes or until filling is thickened and bubbly and topping is golden.

Cool bars to room temperature and chill before cutting to allow them to set. Store in the refrigerator.

Tag a friend in honor of International Day of Frie

Your daily reminder to smile…it’s good for you

5 tips for a healthy lifestyle this summer and yea

Summer Workout Tip: Be mindful of the heat and you

When was the last time you went for a bike ride?

“The Complete Quinoa Cookbook” offers over 100

“The Warrior’s Book of Virtues” uses the bat

Try out this recipe for the perfect summer dessert

Today is Fresh Spinach Day! Spinach is loaded with

Did you know July is National Parks and Recreation

Workout Tip: Make the most of summer and try somet

This tasty and colorful salad is prepared with dif