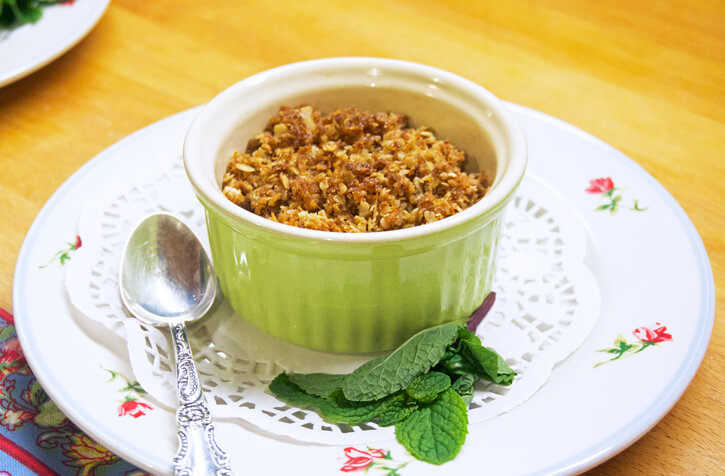 What if we told you that it’s never been easier to prepare vegan food for your family? Enter Easy Vegan Home Cooking, which contains over 125 satisfying, simple-to-prepare, and healthy vegan and plant-based dishes including the one below perfect for any time!

These little apple crisps make a sweet finish to any fall-themed menu. Tender apple slices mixed with a bit of cinnamon, sugar, and maple syrup are topped with a simple combination of ingredients, producing a healthy and delicious dessert. Bonus: This dish makes a great breakfast treat, too!

Put the apples, 1 heaping tablespoon sugar, 1 tablespoon maple syrup, and cinnamon, into a medium-sized bowl. Stir with a large spoon until combined. Divide the apple mixture evenly among the prepared ramekins.

Put the oats, coconut, 1 heaping tablespoon vegan buttery spread, and 2 heaping tablespoons sugar in the same medium-sized bowl. Mix together using your hands or a dough blender until thoroughly incorporated. Sprinkle one-quarter of the oat mixture evenly over the apples in each ramekin.

Put the ramekins in an 8- x 8-inch (or similarly sized) rimmed baking pan. Tent with foil and bake for 30 minutes. Remove the foil and bake for an additional 5 minutes or until the tops are crispy and slightly golden.

Put the pan on a wire rack and let the ramekins cool for 15 to 20 minutes. Drizzle the top of each ramekin with 1 teaspoon maple syrup while they are still warm. Serve warm, or cover and refrigerate, and serve cold. Covered tightly and stored in the refrigerator, leftover apple ramekins will keep for about 2 days. 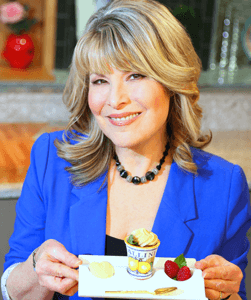 LAURA THEODORE is a nationally recognized television personality, podcast radio host, celebrity PBS vegan chef, and renowned jazz singer. Laura is co-creator of the highly successful Jazzy Vegetarian cooking series on national public television and she is host of the Jazzy Vegetarian Podcast on Unity Online Radio. Laura has made guest appearances on The Talk on CBS, Insider/Entertainment Tonight, and the WCBS Radio Health Report. She has been featured in the New York Times, New York Daily News, Mother Earth Living, VegNews, Family Circle, Readers Digest, and PBS Food, among other highly respected news, food and lifestyle-related journals as well as been on the cover of American Vegan. She is an award-winning cookbook author with such titles as Jazzy Vegetarian’s Deliciously Vegan, Vegan for Everyone, and Easy Vegan Home Cooking.