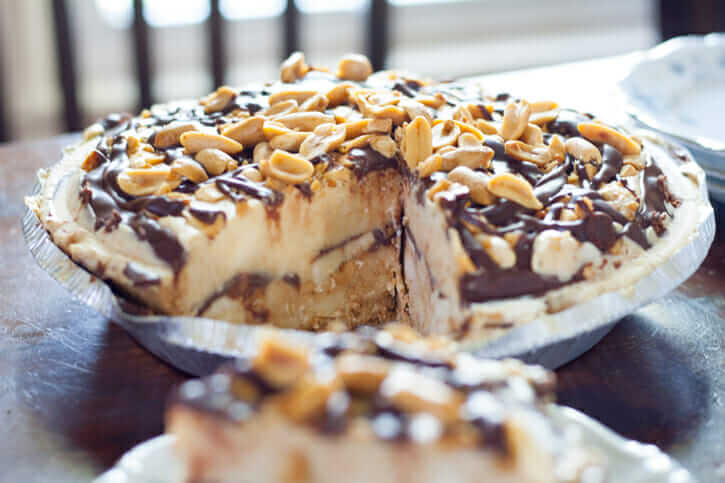 Dirty Vegan by Catherine Gill is the all-in-one vegan-style cookbook that makes eating vegan fun! Dirty Vegan lets you prepare delicious vegan cuisine that anyone and everyone can enjoy, and showcases the sheer variety of amazing recipes you can create, all while remaining vegan. Just in time for summer, we’ve provided this wonderful recipe below.

I make this ice cream pie every year during the springtime, and any other time when I want to make an impressive dessert that tastes out-of-this-world amazing while being super simple. Since I have made this pie so many times, it only takes me a matter of minutes to whip everything together. A no-bake pie like this one is really convenient in today’s busy times. It’s great to make the night before, or even in the morning before work to be enjoyed that night after dinner (since it needs about 6 hours to freeze well and firm up nicely.)

In a large mixing bowl, cream together peanut butter and maple syrup; combine with ice cream. Spread half of ice cream mixture evenly in pie crust. Sprinkle an even layer of ¼ cup of the chopped peanuts on top of ice cream layer and arrange banana slices evenly over top of peanuts. Place in freezer while you make chocolate ganache. In a small saucepan on low heat, melt chocolate chips, soy milk and coconut oil together, stirring frequently. When well combined, remove ganache from heat and set aside. Remove pie from freezer and pour on a layer of half of the chocolate ganache; spread remaining ice cream mixture on top of that. Lastly, sprinkle ¼ cup chopped peanuts and the last of the chocolate ganache. Sprinkle with last 2 tablespoons of chopped peanuts, cover with lid (that accompanies prepared pie crust) and freeze overnight or until firm.

More from Get Fit Now